Key results of the 2014 Population and Housing Census

Key results of the 2014 Population and Housing Census

The Population and Housing Census (2014 RPL), which took place from 12 to 25 May of 2014, covered the persons with usual residence status (persons living in the Republic of Moldova for longer than 12 months, regardless of their citizenship) and persons absent abroad for longer than 12 months. A total of 2,804,801 persons were enumerated, 209 thousand of which were non-residents (7.5%), while 2,595,771 were persons with their usual residence in the Republic of Moldova.

The counties and municipalities, the population of which exceeds 100 thousand, are the same as in 2004, and namely – Chisinau and Balti municipalities, Gagauzia ATU and Cahul, Hincesti, Orhei and Ungheni counties. The number of counties with a population under 50 thousand increased, and  in 2014 there were 9 such counties, while in 2004 – 6.  The county with the smallest population continues to be Basarabeasca. In 2014, most towns – 18, to be more specific, had their population between 10 and 20 thousand, while in 2004 there were 22 such towns.
Out of the total population that participated in the census in 2014, 33.7 thousand were registered as living in collective dwellings, compared with 26.5 thousand in 2004.
POPULATION STRUCTURE BY GENDER AND BY AGE

The female population continues to be predominant in the population structure. The decrease in population, compared with the previous census, affected both sexes equally, but the structure by gender stayed almost the same for both censuses: 48.2% men and 51.8% women. As many as 1,452,702 of the registered persons were women at the 2014 RPL, exceeding the number of men by 100 thousand. Countrywide, the sex ratio is the same as in 2004, for every 100 females there are 93 males. However, from a territorial perspective, this indicator varied from 85 men for every 100 women in Balti to 101 men in Cantemir district, were the number of males is higher. 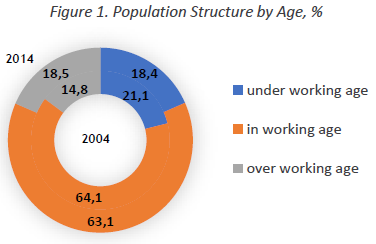 The 2014 RPL collected, upon people’s will and freedom of expression, information about ethnicity, mother tongue, usually spoken language and religion. Thus, the information on the ethnicity is available for 2,754.7 thousand people  (98.2% of the population covered by the census). A share of 75.1% of Moldova’s population stated they were Moldovans, 7.0% – Romanians, 6.6% – Ukrainians, 4.6% – Gagauz, 4.1% – Russians, 1.9% – Bulgarians, 0.3% – Roma, while the other ethnicities represented 0.5% out of the total population. Compared with 2004, the share of people who identified themselves as Moldovans decreased by 1.0 p.p, while the share of people who declared themselves Romanians increased by 4.8 p.p. Over the last 10 years, the share of Russian and of Ukrainian ethnicities decreased by 1.9 p.p and by 1.8 p.p, respectively, while the share of Bulgarian, Gagauz and Roma ethnicities did not change significantly (see Figure 2).

We note that Moldovans, Romanians, Ukrainians, and Gagauz people live mostly in rural area, whereas Russians – in cities. The ethnic groups accounting for more than one thousand people are: Belarusians, Jews, Poles, and Armenians with 2.8 thousand, 1.6 thousand, 1.4 thousand and 1.0 thousand people, respectively.

Figure 2. Ethnic Structure of the Population

In territorial profile, the population distribution by ethnicity shows the majority of the population from country’s counties/municipalities are Moldovans, and in 16  counties the share of Moldovans is higher than 85%, except for Taraclia county where the number of Bulgarians is higher (66.1%) and for ATU Gagauzia with 83.8% Gagauz people. Most of Ukrainians and Russians live in Chisinau and Balti municipality, thus the share of Russians is 37.7% and 13.6%, and of Ukrainians – 14.9% in Chisinau, and 9.6% in Balti municipality respectively.

Although the majority of Ukrainians, Bulgarians and Gagauz people declared the language of their nationality as their mother tongue, every second Ukrainian, Bulgarian and Gagauz usually speaks Russian. Moldovans who usually speak Russian account for 5.7%.

RELIGIOUS CONFESSIONS
Out of the total number of people who declared what was their religion (2,611.8 thousand), 96.8% consider themselves Christian Orthodox, by 1.3 p.p. more than in 2004. As for other religions, there are Baptists (Evangelical Christian Baptists) – 1.0%, Jehovah's Witnesses – 0.7%, Pentecostal Christians – 0.4%, the Seven-day Adventists – 0.3%, the Catholics represents 0.1%, while 0,5% indicated a different confession than those mentioned above. The share of persons who identified themselves as atheists and non-religious (agnostics) was of 0.2%, by 1.2 p.p. more than in 2004.
193 thousand persons did not declare their religion, which accounted for 6.9% of country’s population.
EDUCATION LEVEL OF POPULATION

The results of 2014 RPL show a positive trend in the evolution of education level and of the literacy level of people aged 15 and above.

The education gap between rural and urban population persists. In the urban area, persons with higher and vocational training accounted for 51.3% of the total number of persons aged 15 and above, while in the rural area 22.9% had such education level.

The increase in the general education level of the population resulted in a reduction of illiterate people. Thus, the illiteracy in the country was practically eradicated, and the share of illiterate people decreased from 1.1% in 2004 down to 0.5% in 2014.

NUMBER AND STRUCTURE OF HOUSEHOLDS 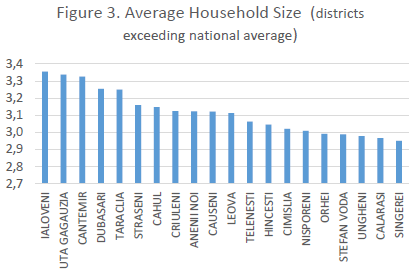 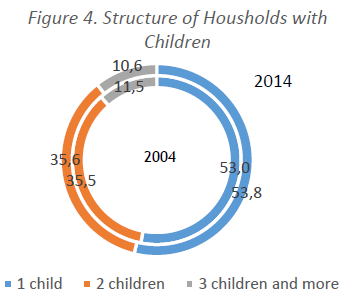 According to the 2014 RPL, out of the 959.2 thousand registered households, 957.7 thousand (99.8%) were living in individual houses, row houses or apartments. The households living in collective dwellings or in buildings that are not intended for living accounted for 0.2% of all the households. Taking into account the number of population, 79.2% of population was living in conventional dwellings (without the persons living in collective dwellings) r individual or row houses, and 20.8% – in apartments (including family hostels). 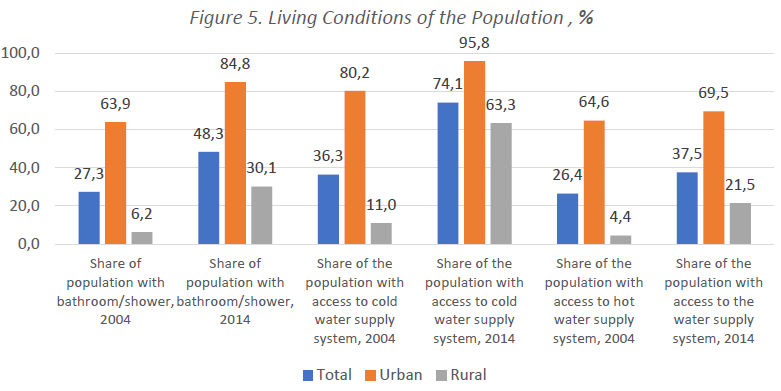 1 According to the post-census survey conducted by the NBS from 16 to 29 June 2014 by applying the UNSD-recommended methodology, Post Enumerations Surveys – Operational guidelines,UN, 2010

For more information, please contact us,
Valentina Istrati
valentina.istrati@statistica.gov.md,
tel. 022 40 31 24
Time use by older persons in the Republic of Moldova
Share