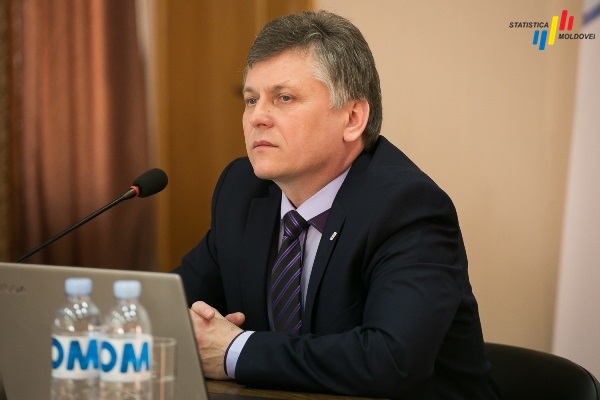 National Bureau of Statistics (NBS) announced today the results of the 2014 Population and Housing Census (2014 RPL), which was conducted from 12 to 25 May of the same year.

During the presentation of the census results, the NBS Director General made the following statement: ,,The 2014 Census, unlike the one conducted in 2004, collected information not only about the population, but also about single and collective dwellings, regardless of their type and situation. It was also for the first time that a post-census survey was conducted to establish the coverage of the RPL'’.

Given the census results, the key socio-demographic indicators of the Republic of Moldova can be grouped into the following categories:

The estimates showed that as many as 2 998 235 people were covered in total by the census, of which 2 789 205 with habitual residence (those who lived prevailingly in the Republic of Moldova over the last 12 months). As many as 193 434 people were not included in the RPL.

Thus, the total number of people in Moldova, covered by the census was 2 804 801 people. As many as 209 thousand of them are non-residents (people living prevailingly abroad for longer than 12 months), which is 7.5%. The number of people with habitual residents in the Republic of Moldova was 2 595 771.

Population structure according to gender and age. The number of women continues to be higher. Looking back at the 2004 census, the structure by gender almost stayed the same, as 48.2% were men, while 51.8% were women. As many as 1,452,702 of the registered persons were females, exceeding the number of males by 100 thousand. Countrywide, for every 100 females there are 93 males. 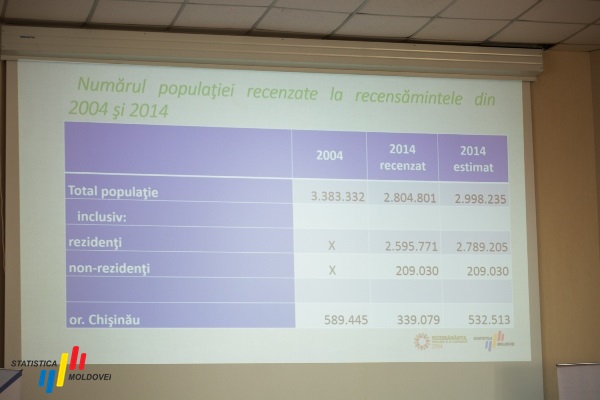 Religious confessions. Out of the total number of people who declared what was their religion (2,611.8 thousand), 96.8% were orthodox, by 1.3 pp more than in 2004. As for other religions, there are Baptists (Evangelical Christian Baptists) – 1.0%, Jehovah's Witnesses – 0.7%, Pentecostal Christians – 0.4%, the Seven-day Adventists – 0.3%, while the Catholics represents 1%. The share of persons who identified themselves as atheists and non-religious (agnostics) was of 0.2%, by 1.2 pp more than in 2004. As many as 193 thousand persons did not declare what was their religion, which accounted for 6.9% of country’s population.

The education gap between rural and urban population persists. In the urban area, persons with higher and vocational training accounted for 51.3% of the total number of persons aged 15 and above, while in the rural area 22.9% have such education level. 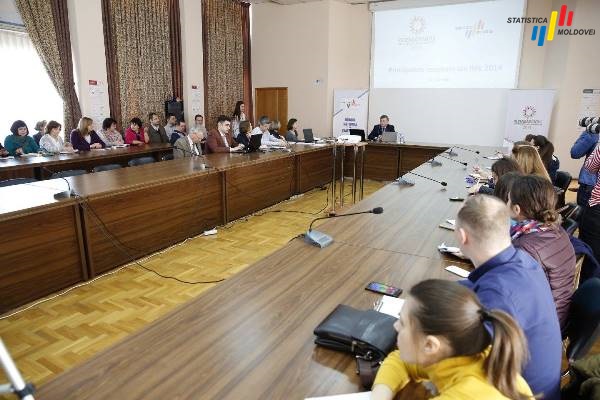 In the time between the two censuses, the average dwelling size for one person increased from 22.5 m2 up to 23.3 m2.
On average, one person gets one habitable room, with a slight difference of 0.1 pp between the urban and rural areas, in favour of the rural one.

The PHC objective was to collect complex information to underlie the public policy in the social-and-economic area, researches for the academia and the business environment to attract investments into the country. Besides, the census will provide information to renew the sampling frame for statistical researches.

‘Policy development in education, health, social protection and in other areas must be underlain only by updated, truthful data, disaggregated per the smallest administrative territorial unit in the country according to different indicators, data that only a the census can provide every 10 years.’ said Vitalie Valcov, Director General of the National Bureau of Statistics, at the press conference.

The cost of organizing the 2014 RPL was MDL 89 million. The finances for organizing and conducting the census, processing the data and publishing the results came from the state budget, as well as from Moldova’s development partners – Swiss Development and Cooperation (SDC), Government of Romania, Government of the Czech Republic, UNICEF, UNDP and the European Union, with the support of the United Nations Population Fund (UNFPA).

For more information, please contact us,
Valentina Istrati
valentina.istrati@statistica.gov.md,
tel. 022 40 31 24
The quarterly publication "Social-economic situation of the municipality Chisinau in January-December 2016" posted on the website
„Energy balance of the Republic of Moldova", edition 2022 posted on the website
Share