In this regard, several National Statistical Offices, including the National Bureau of Statistics of the Republic of Moldova (NBS), have responded to the invitation of the UNECE to participate in this campaign by carrying out activities on each principle consecutively. Since the beginning of the anniversary year, the first 8 principles have been promoted, during which statistical offices in countries such as Canada, New Zealand, Finland, Latvia, United Kingdom of Great Britain and Northern Ireland, Colombia, Spain and Armenia have organised various events and developed materials highlighting principles 1-8 and the importance of their application in statistics.
The 9th Principle "Use of international standards", which describes the need for international coordination of statistics, will be marked by our country through the NBS over the next two weeks. The use of internationally applied concepts, classifications and methods by statistical institutions in every country of the world promotes the production and dissemination of quality, internationally comparable statistics. This and other approaches to the importance of aligning national statistics to international standards will be discussed at the public event ,,The application of international standards in official statistics" that NBS, together with other national and international partners, will organise as part of the campaign. NBS will also launch a series of information and promotional materials during this period that will help the local public to know and understand better these principles.
It should be noted that the Law No 93 of 2017 on Official Statistics is based on the Fundamental Principles of Official Statistics and the European Statistics Code of Practice and was drafted in accordance with the Generic Law on Official Statistics, considering the provisions of Regulation (EC) No 223/2009 of the European Parliament and of the Council on European Statistics.
NBS, as the central statistical authority that is coordinating the statistical activity in the country, is using the international statistical concepts, classifications and methods, in particular those of the EU.
From this point of view:

a) The NBS uses nationally adapted international concepts and definitions in the following areas in the production of official statistics:

b) The following national classifications, fully or partially harmonized with the EU and international requirements, are used for the production and dissemination of the official statistics:

c) The methods which NBS uses in the statistical work correspond to international standards, such as:

In the area of dissemination and quality management the international standards in the following statistical activities can be mentioned:
The 10 Principles, under which official statistics are produced, have been approved at the global level, specifically to ensure the high quality of official statistics needed for sustainable development at national, regional and global levels. The results of the promotion campaign of the Principles will be presented at the Conference of European Statisticians (CES), of which the Republic of Moldova is also a member, which will be held in Geneva in the period 20-22 June 2022.
More information on the promotion campaign of the Fundamental Principles of Official Statistics is available here: https://unece.org/FPOS30. 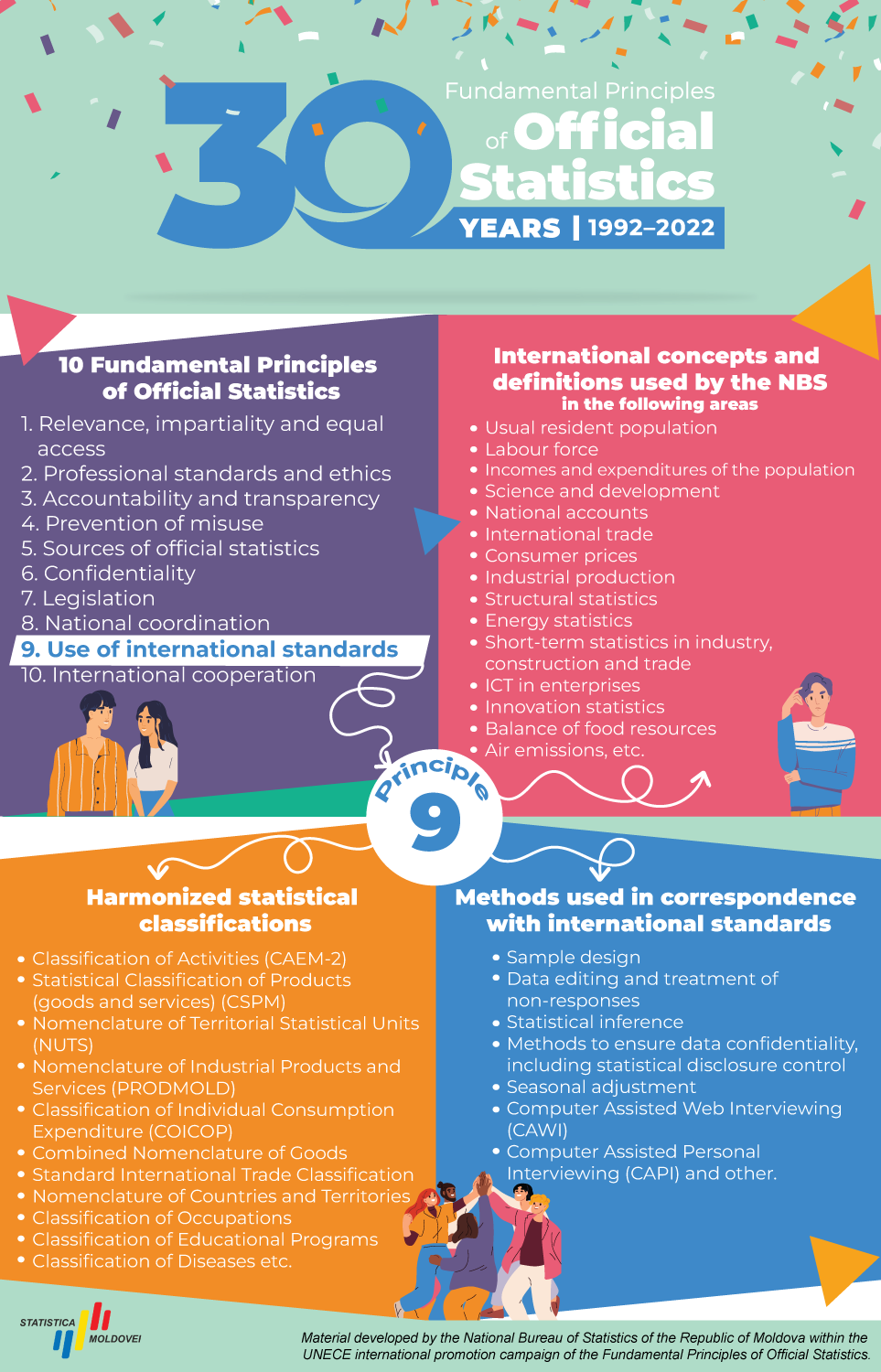